This is the South West African tribe that surrounded my Mom when she was very young. Their outfits were always a marvel.

My Mom made this doll in their honor. 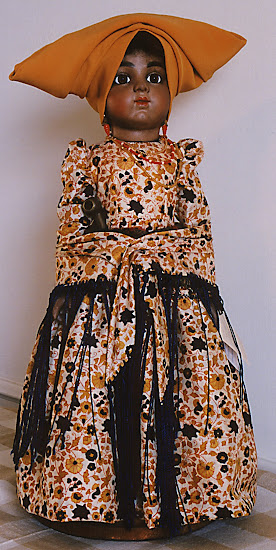 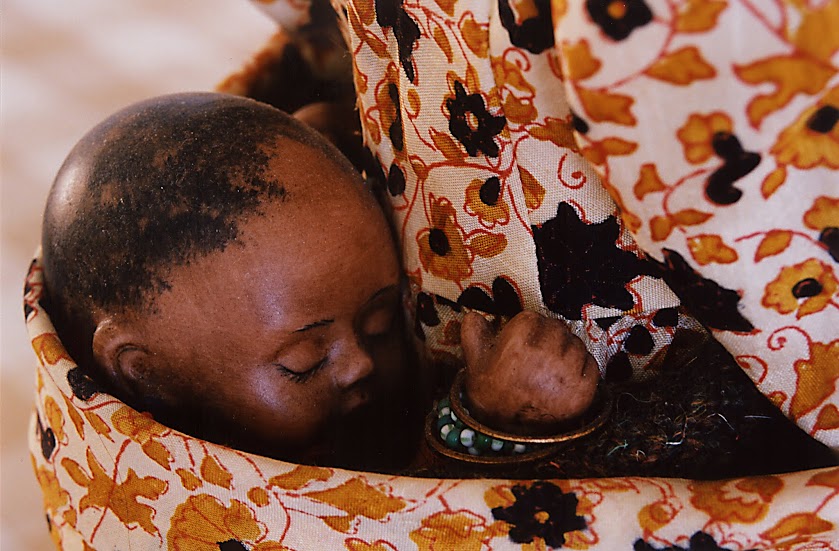 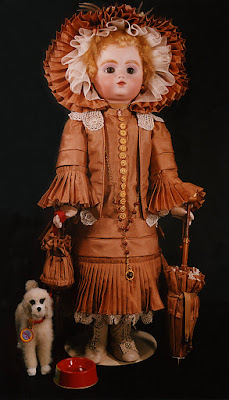 My Mom is a master dollmaker, and I was taking some photos of her dolls when we came across an old article she wrote for Doll Crafter magazine. I figured I’d scan the text and photos, so here it is. First, the pages from the original article. Second, the text and enlarged pictures.

——————–
The dollmakers in the Kansas City area know and respect Heather MacDonald for her fabulous costuming of dolls and the fact that she is such a nice person. Her interest in dollmaking and costuming began in the mid 1980s when a friend of hers wanted to buy a Christening gown for her grandchild. Heather looked at the simple gown with its steep price and thought she could make a lovely one for her own grandchildren. There had been an heirloom Christening gown in her own family. This gown turned out beautifully and she got the idea that it should be displayed on a life-sized doll. In the hunt for a doll she came across the doll studio of ThuTam Freeman in Parkville, MO. She signed up for a class and was so excited to be able to make a doll for the gown and was “hooked” from that time on. She has continued to take classes and make beautiful dolls and lovely costumes for them. She especially loves the research and ﬁnding out the history that is intertwined with the costuming. We look forward to having more articles from this talented costumer in Doll Crafter. – Editor
—————
I began the love of sewing and needlework as a child. My three sisters and I were taught the ﬁne art of stitching by our mother. We learned to embroider and many other ﬁne hand sewing techniques. I love traveling and studying the history of the areas that I have visited. It is so satisfying to me when I research a speciﬁc type of costume and then follow through on the creation of it.

This adventure began ages ago when the picture of an intriguing Folk Costume appeared in ‘What Dolls Wore Before’, a doll auction catalog and reference book for costumes by Theriault’s. I could just see a small girl all dressed up in that outﬁt and cute little bonnet, her fair curls shining against the dark fabric. I set out to ﬁnd out more and it was a long journey. Mildred Seeley wrote that you should, “Always make your dolls as authentic as possible.” It some times takes a lot of hunting for information to accomplish this.

The original doll costume in that auction catalog had been labeled ‘Eastern Europe’, but it was not to be found anywhere there. The hunt for “my” costume that had started in the East, took me all the Way West to the North Sea. I came across dolls by Ronnaug Petterssen of Nolway on page 113 of the book titled “European Costumed Dolls” by Polly and Pam Judd. These were a boy and girl from the l930s in stylized folk costumes of the Hallingdal Region of Norway. The embroidery on both costumes was made with Wool threads. It was known as ROSEAUM embroidery in the Hallingdal River Valley region of southern Norway. This Was so lovely; I just had to reproduce these costumes for my dolls. All of those hours of leaming to embroider as a child were put to good use making these Folk costumes for my dolls. The dolls that I chose were both made from the same mold, the Sonnenberg Child that was a special DAG Convention mold by Seeley’s.

These costumes have used phrases such as Ethnic, Native Ethnic, Festival, Folk, Folkloric, Peasant, Regional and even National. No one word describes them all, but they do have much in common with other nearby countries of Europe, where many of these costumes have disappeared from everyday wear. Norway continues to have a very important place for their Regional Folk costumes. They are worn on very special celebration days such as weddings, Christenings, other celebrations and especially on May 16, which is the Norwegian Independence Day.

In days past Embroiderers and Textile Makers could have made the costumes from the different regions. The tradition of making these costumes has been handed down to each generation and a very particular style was adopted for each region. There are handwork guilds set up in each region and they govern the design, fabrics, embroidery thread, colors and other parts of the costumes. It is to protect the design of the costume and keep them all uniform. The Norwegians are extremely proud of their Regional Folk Costumes, which are called Bunads.

Silver jewelry is a very important element in many of the Folk costumes. The designs of pins, clasps and other jewelry were developed over time and adopted with the advent of the ﬁnal design of the Bunad or Folk costume. There are Folk costumes for the men, with knickers as a choice. If they prefer, they can Wear long pants instead.

I used some design elements from the costume in Theriault’s book and some from the Petterssen’s doll costumes. It is very difﬁcult to include all of the detailed work on a costume so much smaller than that of a person. But by including the most important elements in the right proportions, you too can make your very own treasure.

Any word you have to hunt for in a thesaurus is the wrong word.